U.S. President Barack Obama meets Pope Francis at the Vatican March 27, 2014. Despite differences on moral issues, Obama will find in Pope Francis a welcome ally on issues of poverty and social justice during their meeting. Obama has sparred with the Catholic Church hierarchy in the United States over his support for abortion rights, gay marriage and the "contraception mandate" that requires employers to provide health insurance cover for artificial birth control. REUTERS/Kevin Lamarque (VATICAN - Tags: POLITICS RELIGION) - RTR3ISBR

“It’s a great honor. I’m a great admirer. Thank you so much for meeting me.” With these words, U.S. President Barack Obama greeted Pope Francis today at the Vatican Apostolic Palace.

This was the first meeting between Pope Francis and the President of the United States.

After the initial greeting, the Pope led President Obama to his desk where they spoke in private for just over 50 minutes. According to journalists present, the Holy Father spoke to president in Spanish, and was accompanied by a member of the Secretariat of State, Msgr. Mark Miles.

After their meeting, the members of the delegation accompanying the President were present. Among them were U.S. Secretary of State John Kerry, U.S. Ambassador to the Holy See, Kenneth F. Hackett, U.S. National Security Advisor Susan Rice and White House Press Secretary Jay Carney.

President Obama presented the Holy Father with a variety of seeds from the White House garden in a custom-made seed chest. The chest was designed from American leather and made from wood from the Basilica of the National Shrine of the Assumption of the Blessed Virgin Mary, one of the oldest Catholic cathedrals in the United States.

“Each one has different seeds,” Obama explained to the Pope. “If you have a chance and come to the White House, you can see the garden.” 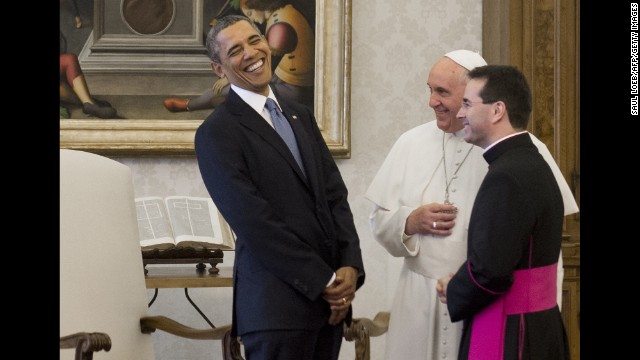 The U.S. President also made a donation of seeds which will be given to a charity in the Holy Father’s name. “These seeds will yield several tons of fresh produce. This gift honors the commitment of Your Holiness to sow the seeds of global peace for future generations,” a note accompanying the gift explained.

For his part, the Holy Father gave the president two medallions. The first was made of hand-coated fused bronze. The medallion “depicts an angel […] embracing and bringing together the northern and southern hemispheres of the earth, while overcoming the opposition of a dragon,” a note from the Holy See explained. The engraving on the medal reads: “A World of Solidarity and Peace Founded on Justice.”

“The figure of the angel illustrates contemporary challenges: bringing the world’s northern and southern regions together and harmonizing them while combating all disruptive forces, such as exploitation, intransigent opposition, new forms of colonialism, indifference, mistrust and prejudice.”

Pope Francis also gave a copy of his Apostolic Exhortation, Evangelii Gaudium. Upon receiving the copy, the President said to the Pope: “You know, I actually will probably read this when I am in the Oval Office when I’m deeply frustrated and I’m sure it will give me strength and calm me down.”

“Muchas gracias (Thank you),” the President said in the Pope’s native tongue. “Please pray for me and my family. They are with me on this journey [meaning of life]. My girls and wife have to put up with me.”

After their goodbyes, President Obama, along with his delegation met with Cardinal Pietro Parolin, Vatican Secretary of State.