The Holy See presented this morning the first encyclical of Pope Francis’ papacy entitled “Lumen Fidei” (The Light of Faith). Presenting the new work was Cardinal Marc Ouellet, prefect of the Congregation for Bishops, along with Archbishop Gerhard Muller, prefect for the Congregation for the Doctrine of the Faith, and Archbishop Rino Fisichella, president of the Pontifical Council for the New Evangelization.

Beginning the presentation was Archbishop Gerhard Muller began the conference explaining the content of the encyclical, which is divided into four parts.

“In the first part”, he said, “we move from the faith of Abraham, the man who recognised in the voice of God ‘a profound call which was always present at the core of his being’, to the faith of the People of Israel.”

Archbishop Muller went onto say that the history of the faith is united and fulfilled in the history of Christ. “In Jesus we are able to say definitively that ‘we know and believe the love that God has for us’ because He is ‘the complete manifestation of God’s reliability’.”

“In the second part, the encyclical forcefully raises the question of truth as one which is ‘central to faith’. Because faith has to do with knowledge of reality it is intrinsically linked to truth: ‘faith without truth does not save… it remains a beautiful story…or it is reduced to a lofty sentiment’,” Archbishop Mueller continued.

“Faith, which opens us to the love of God, transforms the way we see things ‘because love itself brings enlightenment’. Love is authentic when it binds us to the truth and truth attracts us to itself with the force of love. ‘This discovery of love as a source of knowledge, which is part of the primordial experience of every man and woman’ is confirmed for us in the ‘biblical understanding of faith’ and is one of the most beautiful and important ideas emphasised in this encyclical”. 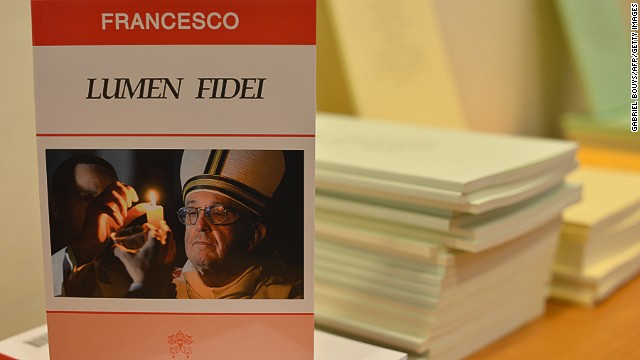 Highlighting several points, Archbishop Mueller said that the encyclical  points out the fact that faith is an encounter “which takes place in history” and “is passed on by contact from one person to another.”

Following his presentation, Cardinal Marc Ouellet, emphasized the significance of the encyclical, given that the work on it was started by Pope Emeritus Benedict XVI and finished by Pope Francis.

“A pillar was lacking in Benedict XVI’s trilogy on the theological virtues,” the Cardinal said. Providence willed that this missing pillar should be both a gift from the Pope Emeritus to his successor and a symbol of unit. For in taking up and completing the work begun by his predecessor, Pope Francis bears witness with him to the unity of the faith.”

“The light of faith,” he continued, “is passed from one pontiff to another like a baton in a relay [race], thanks to the “gift of the apostolic succession.”

Cardinal Ouellet said that the encyclical is an “integral profession of faith, in the form of a catechesis written ‘by four hands’ of the successors of Peter.

Concluding the conference was Archbishop Rino Fisichella, who noted the significance of the encyclical’s release during the Year of Faith and signed on the Feast of Sts. Peter and Paul, the “first witnesses to the faith of the Church of Rome.”

According to Archbishop Fisichella, Benedict XVI was asked to write an encyclical on faith, given that his previous works were  on love and hope. At first not convinced that he would be able to take on the task, Benedict XVI ultimately decided to begin working on it and release it towards the end of the Year of Faith.

“However, history took a different turn and this encyclical is now offered to us today by Pope Francis,” Archbishop Fisichella said, “as a ‘programm for how to continue to live this Year of Faith which has seen the Church involved in many highly formative experiences.”

For the official summary of Lumen Fidei, go to: