The first Latin American to be Pope, he will call himself Francis I.

An hour earlier, white smoke billowing from the Sistine Chapel chimney announced to the world that cardinals gathered inside had made their choice.

Cardinal Bergoglio replaces Benedict XVI, who resigned last month saying he was not strong enough to lead the Church.

The 115 cardinals have been in isolation since Tuesday afternoon, and held four inconclusive votes.

At least 77 of them, or two-thirds, would have had to vote for a single candidate for him to be elected Pope.

Before the conclave began, there was no clear frontrunner to replace Benedict.

Crowds with umbrellas massed in the square flying flags from around the world. 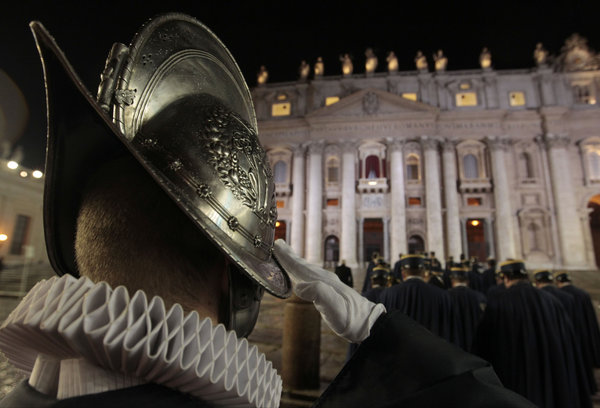 The Catholic News Agency said people were running through the streets of Rome, hoping to reach St Peter’s Square in time for the appearance of the new Pope.

A troupe of Swiss Guards in silver helmets and full regalia marched to the Basilica in preparation for the announcement, as military bands played for the onlookers.

The new Pope will emerge from the loggia overlooking the square to deliver his first speech.

He will have already accepted an invitation to become Pope and the cardinals will have sworn allegiance to him, after which he will have gone to pray alone.