In this image taken from video provided by CTV, Monsignor Guido Marini, master of liturgical ceremonies, closes the double doors to the Sistine Chapel in Vatican City Tuesday, March 12, 2013, at the start of the conclave of cardinals to elect the next pope. Marini closed the doors after shouting "Extra omnes," Latin for "all out," telling everyone but those taking part in the conclave to leave the frescoed hall. He then locked it. (AP Photo/CTV)

“May the Lord, who guides our hearts in the love and patience of Christ, be with you all.”

After this brief prayer, Cardinal Re invited all those gathered to begin the procession towards the Sistine Chapel, where the Conclave will take place, with these words:

“Venerable Brothers, after having celebrated the divine mystery, we now enter into Conclave to elect the Roman Pontiff.

“The entire Church, joined with us in prayer, constantly calls upon the grace of the Holy Spirit, to elect from among us a worthy Pastor of all of Christ’s flock.

“May the Lord direct our steps along the path of truth, so that, through the intercession of the Blessed Virgin Mary, the Apostles Peter and Paul, and all the saints, we may always do that which is pleasing to him.” 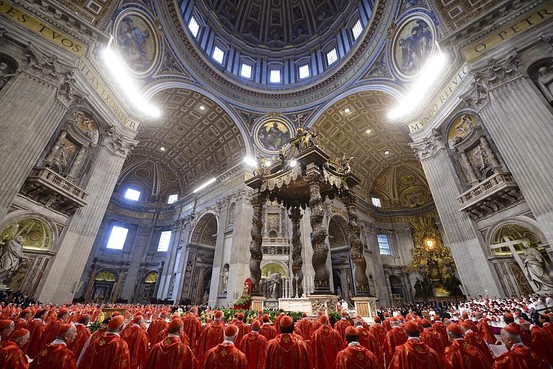 After this prayer, the cardinals processed into the Sistine Chapel following the minister bearing the cross, the choir, the masters of ceremony, the secretary of the College of Cardinals, and the prelate who will direct the meditation to the Cardinal electors. The procession is ended with a deacon, dressed in alb and stole, bearing the book of the Gospels, along with Cardinal Re and the Master of Ceremonies.

During the procession the cardinals sang the Litany of Saints, and concluded with the hymn “Veni Creator Spiritus.”

One by one, the cardinals took a solemn oath, placing his hand on the Gospels and reading in Latin the formula.

When the last of the Cardinal electors had taken the oath, the Master of Ceremonies recited the traditional formula “Extra omnes” at 5:32 local time. All those not taking part in the Conclave then left the Sistine Chapel and the doors were closed.

Besides the Cardinal electors, the only others present in the Sistine Chapel are the Master of Ceremonies and Cardinal Prospero Grech, O.S.A., who will preach the second meditation concerning the grave duty incumbent on them and thus on the need to act with right intention for the good of the Universal Church.

After that exhortation, Cardinal Re will propose to the College of Electors to begin with the first ballot of the Conclave.