Black smoke emerges from the chimney on the Sistine Chapel as cardinals voted on the second day of the conclave to elect a pope in St. Peter's Square at the Vatican, Wednesday, March 13, 2013. In the foreground is the statue of St. Paul. (AP Photo/Dmitry Lovetsky)

The Cardinal electors will return to vote this afternoon where they are expected to hold to more votes to elect the Roman Pontiff. Fr. Lombardi, director of the Holy See Press Office is expected to hold a press briefing earlier today. 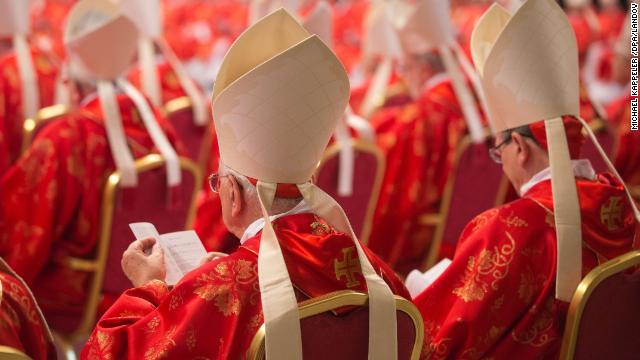 Crowds of pilgrims and faithful continue to flock to St. Peter’s, hoping to be present when the white smoke and the sounds of the bells announces the election of the next Pope. Many were singing and praying last night as the first vote of the evening yielded black smoke at 7:40pm.

Many have commented on how dark the smoke was which was welcomed after the last conclave where confusion set in as to the color of the “fumata”.

In order to produce the black smoke, a chemical compound of potassium perchlorate, anthracene, and sulphur is produced by a second apparatus next to the traditional stove used for ballot-burning. To produce the white smoke a mixture of potassium chlorate, lactose, and rosin is used.

The Cardinal electors will head back now to Domus Santa Martha now and will return to the Apostolic Palace at 4:00pm. The next voting session or scrutinies will begin at 4:50pm.