Pope Benedict XVI celebrates a mass for the newly elected cardinals, in St. Peter's Basilica at the Vatican, Sunday, Nov. 25, 2012. The pontiff elevated, Saturday, Nov. 24, six new cardinals who joined the elite club of churchmen who will elect his successor, bringing a more geographically diverse mix into the European-dominated College of Cardinals. (AP Photo/Andrew Medichini)

As news of Pope Benedict XVI’s resignation spread worldwide, prelates and dignitaries from around the world reacted with surprise and support for the Holy Father’s decision.

Archbishop Vincent Nichols, president of the Catholic Bishops Conference of England and Wales stated that today’s announcement has “shocked and surprised everyone.” However, Archbishop Nichols said that on reflection that the Holy Father’s decision will be recognized as one of “great courage and characteristic clarity of mind and action.”

“The Holy Father recognizes the challenges facing the Church and that ‘strength of mind and body are necessary’ for his tasks of governing the Church and proclaiming the Gospel,” Archbishop Nichols stated in a communique released today.

“I salute his courage and his decision.”

The president of the Catholic Bishops Conference of England and Wales concluded his statement asking all people of faith to keep Pope Benedict in their prayers.

“We Catholics will do so, with great affection and the highest esteem for his ministry as our Holy Father remembering with joy his Visit to the United Kingdom in 2010.  Pray, too, for the Church and all the steps that must take place in the next weeks.  We entrust ourselves to the loving Providence of God and the guidance of the Holy Spirit,” Archbishop Nichols said.

Cardinal Timothy Dolan, president of the United States Conference of Catholic Bishops (USCCB) stated that the Holy Father’s announcement is yet “another sign of his great care for the Church.”

“We are sad that he will be resigning but grateful for his eight years of selfless leadership as successor of St. Peter,” the Cardinal said in a statement released by the USCCB.

Highlighting moments of significance during the Supreme Pontiff’s papacy, particularly the Holy Father’s visit to the United States in 2008, where Cardinal Dolan noted the pastoral leadership of Pope Benedict XVI who “as a pastor feeling pain in a stirring, private meeting at the Vatican Nunciature in Washington, he brought a listening heart to victims of sexual abuse by clerics.” 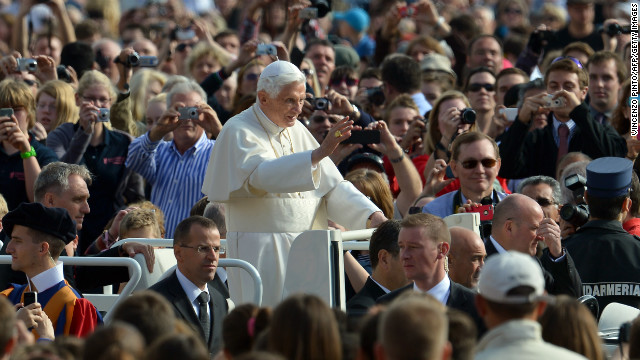 “Pope Benedict often cited the significance of eternal truths and he warned of a dictatorship of relativism. Some values, such as human life, stand out above all others, he taught again and again. It is a message for eternity,” the Cardinal said.

Cardinal Dolan stated that Pope Benedict’s resignation stands as an important moment in the faithful’s lives as citizens of the world. “Our experience impels us to thank God for the gift of Pope Benedict. Our hope impels us to pray that the College of Cardinals under the inspiration of the Holy Spirit choose a worthy successor to meet the challenges present in today’s world,” he said.

Heads of State and foreign dignitaries have noted the Holy Father’s courage in announcing his resignation of the See of St. Peter.

British Prime Minister David Cameron sent his best wishes to the Holy Father following the announcement. “He has worked tirelessly to strengthen Britain’s relations with the Holy See. His visit to Britain in 2010 is remembered with great respect and affection. He will be missed as a spiritual leader to millions,” Cameron said.

“If the Pope himself, after thorough reflection, has come to the conclusion that he does not have the strength any more to carry out his duties, then [he] has my utmost respect,” German chancellor Angela Merkel said.

“He is and remains one of the most significant religious thinkers of our time.”

Ray Flynn, the former U.S. Ambassador to the Vatican and Mayor of the city of Boston, Massachusetts released a brief statement saying that “the Church and world will miss this pious and caring priest who led during a changing society.” Flynn stated that the Holy Father has stated in the past that he would serve the Church as long as God gave him the strength to fulfill his ministry.

“I’ve known the Pope [for] many years and this act of sacrifice is consistent with the man. With the world in chaos, he is leaving to pave the way for a more energized effective leader. I am not surprised, because it was never about him, but what was always about what was best for God and the Church,” Flynn said.

In a statement released today, Mario Monti, Prime Minister of Italy expressed his “profound respect for Pope Benedict’s decision” which he regarded as “great and unexpected.”

“I am sure that [the Holy Father’s decision] been inspired by the desire to serve the Church to the end and to ensure that in the future it may have a strong leadership.”