Pope Benedict XVI has left the Vatican and arrived at a nearby papal retreat, telling worshippers gathered outside for his last public appearance as the head of the Catholic Church that he will soon “simply be a pilgrim.”

“As you know today is different to previous ones,” Benedict said in Italian to those gathered outside the Castel Gandolfo, just outside Rome, according to a translation by Reuters news service.

“I will only be the supreme pontiff of the Catholic Church until [2 p.m. ET]. After that I will simply be a pilgrim who is starting the last phase of his pilgrimage on this earth.”

Benedict is the first pope to resign in almost 600 years.

As his closest aide wept by his side at Vatican City, Benedict bade farewell to officials gathered in the San Damaso courtyard of the Apostolic Palace, as a corps of Swiss Guards stood at attention. Benedict’s helicopter left the Vatican gardens en route to the papal summer residence at Castel Gandolfo, just outside Rome. Bells tolled as the helicopter took off.

They tolled again as he arrived in Castel Gandolfo, where the central piazza was jammed with people eager to witness the historic moment.

Benedict is expected return to live behind the Vatican walls in two to three months, in a monastery being readied for him.

Earlier Thursday, the Pope told 144 cardinals in Vatican City on Thursday that he will pledge his unconditional obedience to the next pontiff. Delivering an unexpected speech inside the Vatican’s frescoed Clementine Hall, Benedict urged the “princes” of the church to set aside their differences as they elect the next pope, urging them to be unified so that the College of Cardinals works “like an orchestra” where “agreement and harmony” can be reached despite diversity. It was his last chance to officially say goodbye to the cardinals, more than half of whom he appointed.

The Pope, wearing his crimson velvet cape and using a cane, said he would pray for the cardinals in coming days as they choose his successor, the 266th leader of the Catholic Church and its 1.2 billion followers.

“Among you is also the future pope, whom I promise my unconditional reverence and obedience,” Benedict said in his final audience.

His scheduled return to Vatican City has deepened concerns about the shadow he will cast over the next papacy.

Benedict has tried to address those worries, saying that once retired he would be “hidden from the world.”

CBC’s Susan Ormiston said with Thursday’s comments to the cardinals the Pope was “trying to put down any worries that the Vatican might have that he would be pulling strings from behind closed walls.” 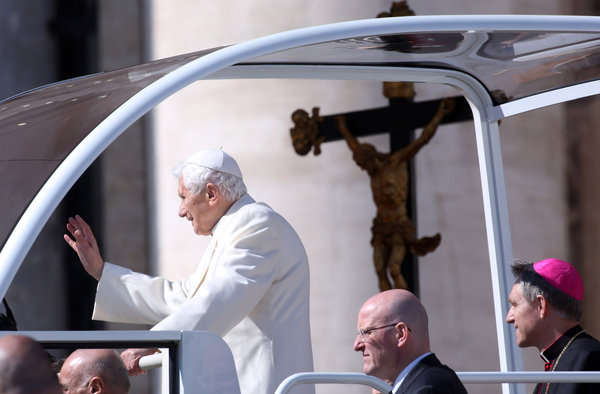 And in his final speech in St. Peter’s Square on Wednesday, he said he wasn’t returning to private life, but rather to a new form of service to the church through prayer.

Marco Politi, an Italian journalist and Vatican expert, said the resignation is a historic turning point for the Catholic Church.

“Here in Rome, the Catholic Church has [had] the legacy of the Roman Empire,” he told CBC News. “This way of an old imperial church is fading away.”

Politi said the cardinals will have a choice between choosing a pope who will be open to reforms or to “defend the trenches of the old tradition.”

Cardinal Thomas Collins, the Archbishop of Toronto, Cardinal Jean-Claude Turcotte, the archbishop emeritus of Montreal, and Cardinal Marc Ouellet of Quebec will be among the senior clergy on hand to choose their next leader.

In all, 115 cardinals under the age of 80 are expected in Rome for the conclave to vote on who should become the next pope; two other eligible cardinals have already said they are not coming, one from Britain and another from Indonesia. Cardinals who are 80 and older can join the college meetings but won’t participate in the conclave or vote.

Earlier this week, Benedict gave the cardinals the go-ahead to move up the start date of the conclave — tossing out the traditional 15-day waiting period. But the cardinals won’t actually set a date for the conclave until they begin meeting officially Monday.

The pope’s resignation leaves the Vatican in uncharted waters; no pontiff has stepped aside volutarily since Celistine V in 1294. It is known Benedict’s papal ring will be destroyed, smashed by a silver hammer, and a wax seal will be placed on the papal apartments in the Vatican so that no one may enter before the new pope.

In Canada, thanksgiving masses were planned for noon across the country to mark the end of Benedict’s reign. For instance, 20 bishops from across western Canada and the North are expected in Edmonton.