BAGHDAD, IRAQ (CNA) – Patriarch Louis Raphael I Sako, head of the Chaldean Catholic Church, says greater security is needed for Christians in Iraq who are leaving their homeland for fear of local disorder.

“They are leaving the country because there is no stability. Another reason is the rise of fundamentalism,” the patriarch told Aid to the Church in Need Feb. 25.

“Security and freedom” are the most important issues for the Church’s survival in Iraq, he said.

Patriarch Raphael is head of the Chaldean Patriarchate of Babylon, and is Archbishop of the Chaldean Archdiocese of Baghdad. The Chaldean Catholic Church is one of the Eastern-rite Churches which is in full communion with the Pope.

Patriarch Raphael was confirmed in his position on Feb. 1. He is 64, and in 1974 was ordained a priest for the Chaldean Archeparchy of Mossul. He then served as archbishop of the Chaldean Archdiocese of Kerkuk from 2003 until his selection as patriarch of Babylon. 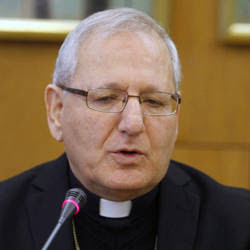 He said that when Iraqi Christians “feel secure, free and equal with the others, they will stay, otherwise they will leave.”

In 1990 the Chaldean Archdiocese of Baghdad had some 481,000 members. That had dropped to 140,000 in 2003, when Saddam Hussein’s Baathist government fell. In the first three years of the introduction of democracy to Iraq, the archdiocese lost another 5,000 members.

“Christians have lost their trust in the future. They are disappointed,” said Patriarch Raphael.

Bomb attacks in Kerkuk and Tuz Khurmatu in January left at least 30 people dead and more than 200 wounded, according to Aid to the Church in Need, which said that violence was politically motivated.

“Fundamentalism does not accept Christians… Extremists think that the reason for their predicament is the West, i.e. Christians,” Patriarch Raphael noted.

He said there is unhealthy tension among political factions, and between the national government and the Kurdish government which controls much of northern Iraq.

Patriarch Raphael said that Pope Benedict welcomed his confirmation as patriarch with prayers and congratulations, and that the pontiff said, “I hope you can stimulate the dialogue in your country.”

The patriarch has long been a part of dialogue with Muslims in the country. Iraq’s population is roughly 95 percent Muslim, and three to five percent Christian.

“The Pope appealed to me so that we remain, as in the past, a bridge for all, between Christians and Muslims and between Iraqi citizens.”