(Vatican Radio): The ‘delicate historical moment’ that the ancient Chaldean Church of Babylon is experiencing and the need for unity in its leadership were the chief concerns expressed Monday morning as the Patriarchal Synod opened here in Rome. Emer McCarthy reports:

Convoked by Pope Benedict XVI, under the Presidency of Cardinal Leonardo Sandri, Prefect of the Congregation for Eastern Churches, the Synod has the task of electing a new Patriarch, Pater et Caput of the Chaldean Church, to succeed Cardinal Emmanuel III Delly.

Comprised of fifteen men, the bishops come mainly from Iraq, ancestral home of the Chaldean Church, but also from neighboring Iran, Syria and Lebanon as well as representatives of the growing Chaldean Diaspora in Australia and North America.
Opening proceedings Monday morning, Cardinal Sandri underscored the crucial timing of the Synod. In his brief discourse the prelate, a bridge between the ancient Eastern Churches and Rome, had two main concerns: Firstly the ‘delicate historical moment’ of the Chaldean Church and secondly the need for unity in its leadership.

He stated: “this act of election of a new Patriarch of paramount importance before God, the Church and all the faithful … especially at this delicate historical moment, is the equal responsibility of each bishop”.

On this, he added, depends “the very future of the Chaldean Church, Her tradition and heritage, her ecclesial, social and historical circumstances, the elaboration and application of pastoral guidelines”.

Cardinal Sandri concluded: “The Chaldean Church invites you to make the necessary sacrifices through the eyes of faith, and to lay aside all personal interests for the benefit of your Church and the Universal Church…in the knowledge that what unites you in terms of spiritual, sacramental and pastoral care is far superior to what divides you so that the unity that strengthens is expressed in this election with all its force and effect”. 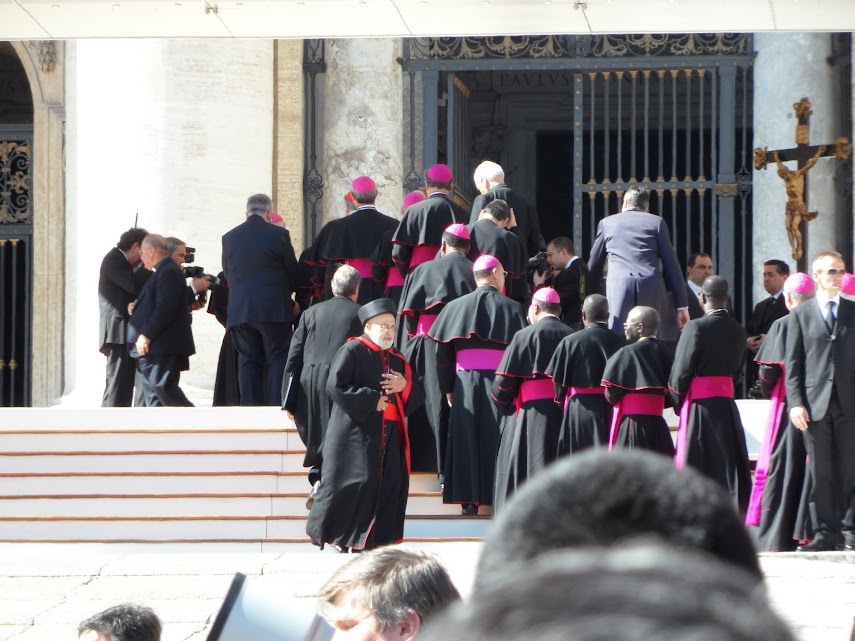 All 15 men will spend this week in strict segregation at the Sts. John and Paul retreat centre run by the Passionist Fathers on Rome’s Caelian Hill. Their deliberations begin Monday with day of retreat and meditation led by Bishop Enrico Del Covolo, Rector of the Pontifical Lateran University and Archbishop Rhino Fisichella, President of the Pontifical Council for the New Evangelization.

Speaking before the Synod opening to Vatican Radio’s Sergio Centofanti, Cardinal Sandri expanded on what he sees as the main challenges facing the centuries old church in this “delicate historical moment’:

“The main challenges are those of the Church in general: the faith and in the particular case of the Chaldean Church, of course, a great importance is given to ecumenical and interreligious dialogue. The lack of faith, because Christians are few and many have had to flee, migrate, go elsewhere to seek the peace and security that were missing in their homeland. In this situation of violence and suffering, the faith has faded”.
Q : You visited Iraq recently. What were your impressions?

“My impressions were that despite all we hear from the news, the violence and terrorism, there is a living, vibrant Church in Iraq, which manifests itself through the Chaldean Church and through the Syrian Catholic Church, and through the Latin Church. They are our brothers and sisters who live the Gospel, trying to put all their lives in the hands of the Father, through Jesus Christ, in the fellowship with the Holy Spirit. And I have seen this in the Divine liturgies I attended and I was really heartened by their hope for a better future. And then, seeing that they really feel that they belong to the universal Church with all their soul, the Catholic Church, they feel the Pope’s fatherly embrace, they feel close to him, as indeed, he feels close to them.

Q: An Islamist wind is blowing in Arab countries. Is dialogue possible today with the Muslim world?

We share the belief in one God with Muslims. But there is a common commitment that can also be united with this so-called Arab Spring, which is to give importance to the dignity of the human person, the dignity that is manifested in freedom, especially religious freedom, in the protection of fundamental rights of men and women.

Q: But are there fears for the future of Christians?

Christians, living in a predominantly Muslim country, may have fears, but not because of Islam, because Islam is a religion that wants harmony and peace, all that is deformation of Islam such as violence or those who want to impose their religion by force, have nothing to do with Islam. With authentic Islam there is a possibility of genuine dialogue and understanding.