ROME, (Zenit.org).- Benedict XVI sent a video message to those participating in the first leg of the “Ten Squares for Ten Commandments” event organized by the movement Renewal in the Spirit and sponsored by the Pontifical Council for Promoting the New Evangelization.

The initiative is scheduled to include 10 events in 10 public squares where each event focuses on one of the Ten Commandments through entertainment, culture and personal testimony. The first meeting was held in Piazza del Popolo in Rome and focused on the theme of “Though shall not have other gods before me.”

The Holy Father greeted the participants and thanked the Renewal in the Spirit movement for organizing the event. The Pope also spoke of the significance of the Ten Commandments as an “ethical code” which builds a society in which the covenant relationship with the Holy and Just God illumines and guides the relations between persons.” 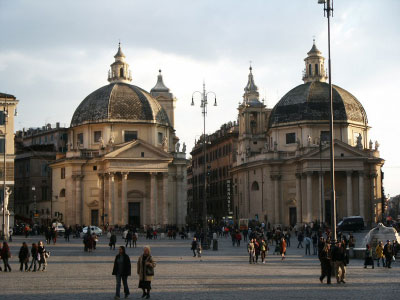 While posing the question on how the Decalogue relates in today’s secular and relativistic society, Pope Benedict XVI referred to the Commandments as a guide to genuine love and true happiness.

“They are a sign of the love of God the Father, of his desire to teach us the correct discernment of good and evil, of the true and the false, of the just and the unjust. They are comprehensible to all precisely because they establish the fundamental values in concrete norms and rules, in putting them into practice man can walk on the path of true liberty, which renders him firm in the way that leads him to life and happiness,” the Pope said.

Without the guidance of the Commandments, the Holy Father explained, man would be left to himself, proud in his own autonomy. In doing so, man “ends up by following the idols of egoism, of power, of dominion, polluting the relations with himself and with others, and following paths not of life but of death.”

The Pope concluded his video message, conveying his hope that the event would encourage those present to let their lives be guided by the commandments. “I hope that this initiative will arouse renewed commitment in witnessing that the way of love, traced by the Commandments and perfected by Christ, is the only one capable of rendering our life, that of others and of our communities fuller, better and happier,” he said.

Renewal in the Spirit is comprised of both lay and religious members. The movement is actively involved in evangelization efforts, and cultural and social events aimed at promoting a “culture of Pentecost.” Statutes of their rule of life were approved on Jan. 30, 2007, by the Italian Bishops Conference.